This tag is associated with 3 posts

Leamington C & AC’s Sue HARRISON (MMAC Member #90754) is one of three who have been shortlisted for the CSW Sportswoman of the Year Award. 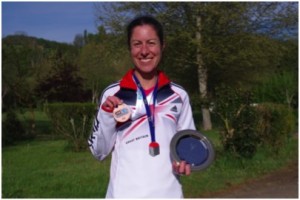 In April when running for Great Britain Sue won the bronze medal in the IAU European 100km Championships in France. Her time of 7:48:12 puts her 6th on the UK ‘all-time list’ as well as being a UK W40 record. Additionally it ranks her 4th on the IAAF World rankings for 2013 and No.1 on the UK rankings. After winning the Perth Open 50km Sue also heads the 2013 UK 50km rankings with the time of 3:41:56.

Sue won the Midland Masters AC’s 10 mile road race title last December and currently is top of the W40 UK 2013 lists at 10km track, 50km and 100km road as well as 4 other top 10 masters W40 rankings for this year. Included in her race open race wins this year are half marathons at Warwick Castle, Kenilworth and Cheltenham.

The Award is decided by public vote. Voting can only be done by going to http://tinyurl.com/njcdeu9  and scroll down the page to find Sue. Click on VOTE NOW

One vote is allowed per email address. Voting will close on the 20th October.

The latest edition of “the Bear” – the newsletter of Warwickshire County AA – is now available on the County web site.

Go to www.warwickshirecountyaa.co.uk and select “the Bear” from the list of contents.
Many thanks once again to Keith Richards for editing the newsletter
A reminder that the closing date for entries to the 2011 Track and Field Championships is ToMoRRoW!!! People who enter on line have a further week until April 20th and get a £1 reduction.
Ray Morgan
Chairman, WCAA

It is impossible for us to reach every athlete in the County so please distribute this mail to your Members who are interested in road running.
(1)  New dedicated web site for the League
We am pleased to tell you that the WRRL now has its own web site. To reach it, go to the County web site at www.WarwickshireCountyAA.co.uk and click on “Road Race League” on the left hand side, or you can go directly to http://tinyurl.com/69lzecc
Please build a link to it into your Club web sites.
The site has a lot of information about how the League works and what it offers in terms of races and prizes. Once the League gets underway it will also show you the points scores for every athlete and every team after every race so you can see how you are performing.

Many thanks to Richard Carney for setting up the new site.
(2)  New scoring system.
We have developed what we hope will be an efficient scoring system which should help us put up to date League scores on the web site much quicker than was possible in the past. Even so we will be reliant of the race promoters giving us an electronic copy of their results as soon as possible after the race.
Many thanks to Mike Ellis who set up the new system and to Sean Lonergan and Richard Broooks (his colleagues at Spa Striders) who will operate it this year.
Mick Petch, who has produced the results single handed for the past ten years, will use his extensive knowledge of the League to audit the new system.
(3)  Updated calendar of races
We have attached an updated calendar of races for the current 2011 season. There are two date changes. The Rugby 10 mile race is scheduled for October 23rd and the Kenilworth Half Marathon has moved to 4th September (to generously accommodate the Coventry City Council Half Marathon). You can also download a copy of the calendar from the new web site.
The first race is the Regency Run which is already sold out. If you have missed the boat but would like to run let one of us (Geoff Wheeler or Ray Morgan) know immediately.
The second race is the Northbrook 10k for which we have attached an entry form.
Full details are available on the Club web site at www.NorthbrookAC.org.uk
The third race is the Two Castles which is also already sold out. If you have missed the boat on this one use the event web site to add yourself to the waiting list which will be reviewed nearer the race date. Do NOT contact us directly about it.
(4)  What next
The 2011 season gets underway on Sunday 10th April with the Regency 10k. The first of nine league races. Please do your utmost to get your club members to enter as many races as they can. Promoting clubs deserve their support and previous results clearly indicate that the clubs with the most runners usually do well in the team competitions.

So why not circulate the league calendar around your membership giving them plenty of time to get their entries in.

We hope to generate as much interest as we can by keeping the new scoring system up to date on the website where your members can clearly see their positions in the league.

Good luck to everyone and may the best woman/man/teams win.